How many times have you planted tulips for a spring display, only to see the odd leaf (if you’re lucky) in the second year? Wouldn’t it be nice to get a repeat performance from them? Although the flowers are smaller than the highly bred ones, specie tulips will do just that – they are genetically programmed to keep going, year after year.

Specie tulips grow in southwest Europe and northern Africa, along both sides of the Mediterranean, in the Middle East, and through central Asia to the northwestern parts of China. They start into growth with the spring rains, flower and set seed, and then go dormant until the following spring, often receiving a summer baking. The majority grow in well-drained or stony soils, and never sit in wet soil for any length of time. These are the conditions we are trying to replicate. so a sunny spot in light soil, or one improved with horticultural grit, is ideal.

Tulipa kaufmanniana is the first to flower, usually in March. Although the blooms are usually red and yellow, they do vary (I have seen the with totally red, yellow, or white ones growing in the wild). This variability has led to several cultivars, but all are good ‘doers.’

The flowers of tulipa turkestanica are small and white with a yellow centre, and held on stems up to twelve inches high. In exposed positions they can get badly battered in March gales, so a slightly more sheltered spot is better to get the best from them.

Tulipa linifolia is another variable tulip with several varieties in mixtures of hot colours. The specie is a bright red, and the flowers open very wide in sunshine, almost like a crocus. 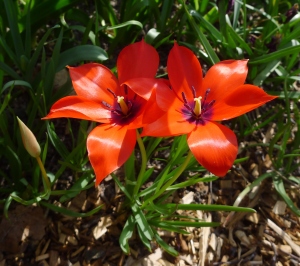 If you prefer something a little more subtle in colour, the tulipa saxatilis is the one for you. It has pink flowers, again with a yellow centre but bordered by white; the combination looks better than it sounds.

Finally tulipa tarda, the exception that prefers light shade and a humusy soil. The yellow centre can extend almost to the edge of the white petals, and it clumps up very quickly.

So forget the larger flowered tulip (or treat them as annuals), and grow more of the specie ones for a repeat performance every spring.